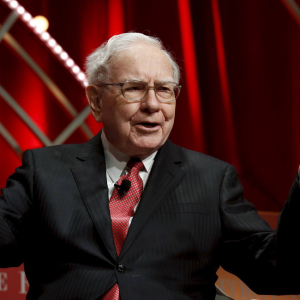 By CCN.com: Berkshire Hathaway just bought its first Amazon shares, Berkshire founder and CEO Warren Buffett revealed to CNBC Thursday night. On the eve of an annual Berkshire shareholders meeting in Omaha, Buffett told CNBC that someone at Berkshire’s asset management desk just invested in some Amazon shares, but “it wasn’t me.” “One of the fellows in the office that manage money… bought some Amazon so it will show up in the 13F.” Amazon stock purchase a first for Warren Buffet The stake in Amazon is a first for the multinational investment conglomerate. Although Warren Buffett has had strong words The post Warren Buffett Buys Amazon Stock; Will He Change His Mind On ‘Rat Poison’ Bitcoin? appeared first on CCN

Market Cap
24h Vol
65.88%
Bitcoin Share
0
Today News
Read the Disclaimer : All content provided herein our website, hyperlinked sites, associated applications, forums, blogs, social media accounts and other platforms (“Site”) is for your general information only, procured from third party sources. We make no warranties of any kind in relation to our content, including but not limited to accuracy and updatedness. No part of the content that we provide constitutes financial advice, legal advice or any other form of advice meant for your specific reliance for any purpose. Any use or reliance on our content is solely at your own risk and discretion. You should conduct your own research, review, analyse and verify our content before relying on them. Trading is a highly risky activity that can lead to major losses, please therefore consult your financial advisor before making any decision. No content on our Site is meant to be a solicitation or offer